Get fresh music recommendations delivered to your inbox every Friday.
We've updated our Terms of Use. You can review the changes here.

The Garden of Love - Songs of William Blake 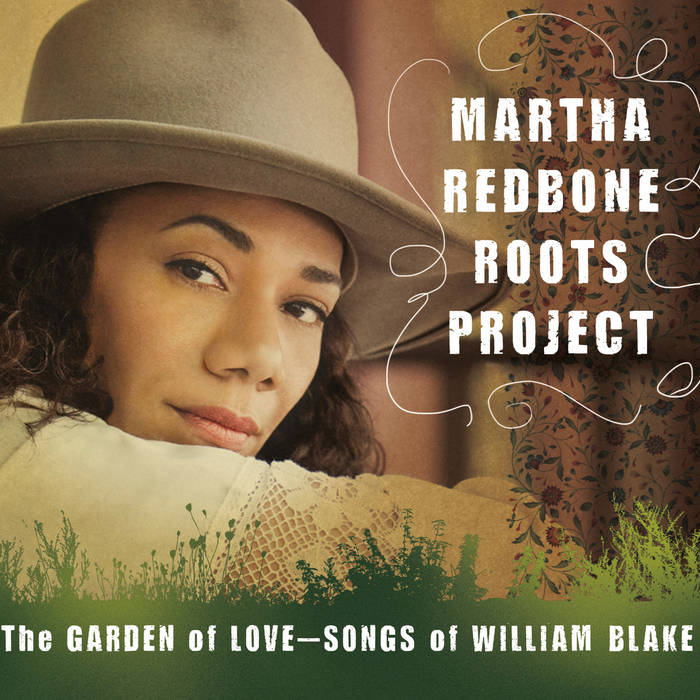 Ulrich Braselmann a few years ago, around 1998 or so i bought a small pocketbook :
"William Blake - Songs of Innocense and Experience".
And now 15 years later, i can hear the words , sang by a supernaturel voice, grande , merci, dankeschön, i´m "overwhelmed". Favorite track: The Garden of Love - FREE.

A collection of William Blake poems set to the music of Appalachia by singer-songwriter Martha Redbone, produced by the Nitty Gritty Dirt Band's John McEuen.

THE POWER OF A STORM, THE GENTLENESS OF A BREEZE

"Martha Redbone's new collection The Garden Of Love sings of the earth, skies of blue & grey, hard birth & easy death. It sings a poem of prophecy whispered by the oldest tree in the farthest corner of the valley. It sings of leaving & returning & of the equanimity of Angels. Martha's voice itself is the very sound of the dreams of hills and rivers- Homebound & Restless; interpreting the hauntingly lovely words of William Blake with the power of a storm & the gentleness of a breeze." VERNON REID

"Poised to be Americana’s next superstar" VILLAGE VOICE

"Apart from the fact that this is a remarkable recording in terms of Redbone’s liquid vocals and the harmonious blend of McEuen’s instruments (banjo, guitar, dubro, fiddle, mandolin, autoharp, dulcimer),the combining of music with William Blake’s “songs” is an amazing achievement. It is as though this 18th century poet’s work has been quietly waiting for Martha Redbone. After all, Blake always called his poems “songs,” suggesting that they were meant to be sung. Here they are then! After over two centuries, finally, exquisitely complete." GARY CARDEN, SMOKY MOUNTAIN NEWS

"I am impressed by how well the minor keys and elegiac tones bring out the darker shadows of Blake's songs."
SUSAN J. WOLFSON, PROFESSOR OF ENGLISH, PRINCETON UNIVERSITY

"Martha Redbone's version of 'The Garden of Love' is a very old timey swampy thing that I like quite a lot." JOHN SCHAEFER WNYC, NEW SOUNDS

"Martha Redbone's journey back to the source of American music — and to her own heritage — has conjured up an artistic triumph. The Garden Of Love poignantly reveals a musician at the top of her game, vocally, intellectually, and spiritually. One not only hears the voice of the Bard, in this case William Blake's legendary prose arranged and phrased brilliantly, but also the very origins of American music arising from the blend of American Indian, African American, and English folk music traditions. It's the dawn of a new day for this fascinating artist, and we're all the beneficiaries of her confident, and yet sensitive, quest." from a review by TIM JOHNSON, ASSOCIATE DIRECTOR OF THE SMITHSONIAN INSTITUTE; NATIONAL MUSEUM OF THE AMERICAN INDIAN

“The Garden of Love is a 12-track CD filled with moving songs that are masterfully crafted and performed with near perfection. I really don’t want to sound like I’m gushing, but I’ll be danged if I’m not into my fourth listen from start to finish as I’m writing this review." DAN HARR, MUSIC NEWS NASHVILLE

"Martha Redbone is a charismatic indie-soul diva whose sound is a just-right mix of retro and modern." TIME OUT NEW YORK

"Redbone gets to the core of Blake's words, adding soul and swing to poems that were penned 200 years ago... The Garden of Love - Songs of William Blake is a landmark album that should propel her (Martha Redbone) to the forefront of the folk scene." HANS WERKSMAN, HERE COMES THE FLOOD

"The Garden of Love is a pure slice of knee-slapping organic folk from another time and place. Redbone has a great bluesy style of singing that is immediately inviting and effective. Beautiful music from a beautiful heart. Top pick." BABYSUE

"This CD is quite a revelation...nothing short of amazing....." BRIAN LUSH, ABORIGINAL SOUNDS

Special Guests:
David Amram – flute on "A Dream", percussion
Lonnie Harrington – Seminole chant and rattle on “A Dream”
Spottiswoode – recitation on “Why Should I Care for the Men
of Thames”

Bandcamp Daily  your guide to the world of Bandcamp